The recent decision of Gama Aviation (UK) Ltd & Another v MWWMMWM Ltd [2022] EWHC 1191 (Comm) has dealt with some important contractual issues such as whether a contractual novation can be implied in circumstances where an underlying agreement requires variations and termination to be made in writing, and the law relating to withholding of consent.

In this case the owner of a Being 737 aircraft (MWW) had stopped paying invoices raised by Gama for aircraft maintenance services provided under an Aircraft Support Services Agreement (ASSA). The original ASSA had been entered into between International Jet Club Ltd (IJL) and MWW in 2008. However, following a company re-organisation in 2017 Gama acquired IJL, the intended effect of which was to novate the obligations under the ASSA from IJL to Gama.

Although it was Gama’s position that an implied novation had taken effect in 2017, without prejudice to that position, in August 2021 a deed of assignment was prepared to assign absolutely all of IJL’s rights and benefits to Gama. To be effective, the deed required the consent of MWW, with such consent “not to be unreasonably withheld”.

In the face of mounting unpaid invoices, in December 2020 Gama and IJL had commenced a claim against MWW. As MWW failed to respond to the claim in time, Gama and IJL obtained a judgment in default in April 2021. MWW applied unsuccessfully to set aside the default judgment and filed a defence in which they asserted that they were justified for not making payments to Gama under the ASSA because the rights under it were still held by IJL – i.e. the novation and the deed of assignment had not actually had the effect of transferring rights and benefits to Gama.

MWW failed to pay the sums due under the default judgment and as Gama had continued to provide services under the ASSA it amended its claim to include further sums owed, and applied for summary judgment against MWW on the basis that the defence submitted was without merit.

At the hearing of the application, the judge held that MWW’s defence had no reasonable prospect of success. In terms of the novation, Gama had passed the objective test for establishing the existence of an implied novation – it was relevant that Gama had provided services under the ASSA to MWW at MWW’s request and with its full knowledge, that documents provided by Gama to MWW showed sums being due to Gama and not IJL, and that Gama and MWW had openly discussed entering into a new agreement at the time. The clause of the ASSA requiring any variation to be in writing did not apply to novation, which involved discharge of the original contract by consent and its replacement by another.

MWW could not persuade the court that the assignment had not taken effect as they had not consented to it. MWW argued that it had withheld consent on the basis that it wished to raise a counter-claim, that the wording of the assignment was contingent and not absolute, was in any event unclear, and inconsistent with the argument that there had been an implied novation. The court rejected these arguments and held that the reasons for withholding consent were unfounded and irrelevant, and therefore unreasonable - Gama had been entitled to enter into the assignment without MWW’s consent.

This case is the latest in a series concerning “no oral modification” clauses, and their effectiveness (or otherwise). In this case, where there has been an implied novation by the parties' conduct , the “NOM” clause was of no effect and parties wishing to protect against an informal novation may need to adopt specific wording in their agreements to do so. It is also a stark warning to contractual parties who might try and gain an advantage by withholding consent to an assignment. The court will not be persuaded that the withholding of consent is valid unless that party can show that its concerns relating to the assignment are genuine and reasonable. 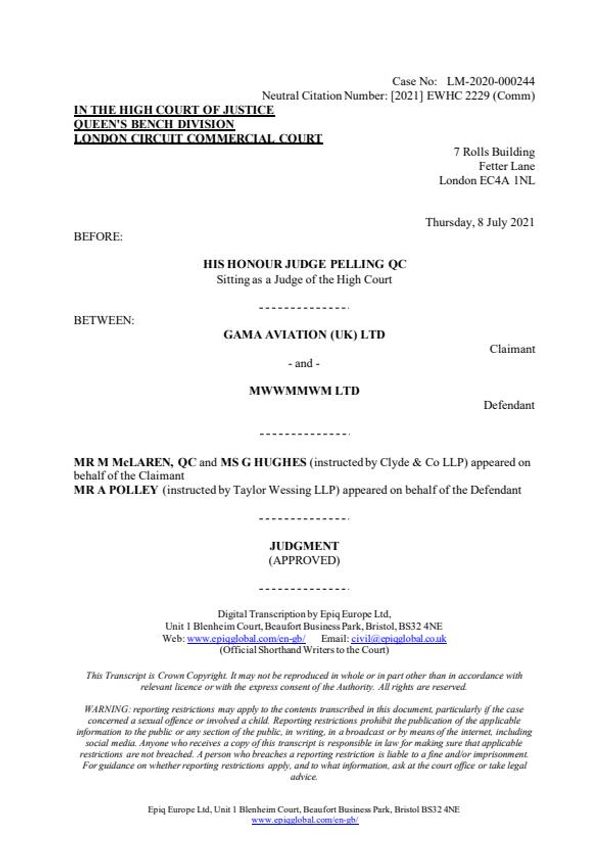